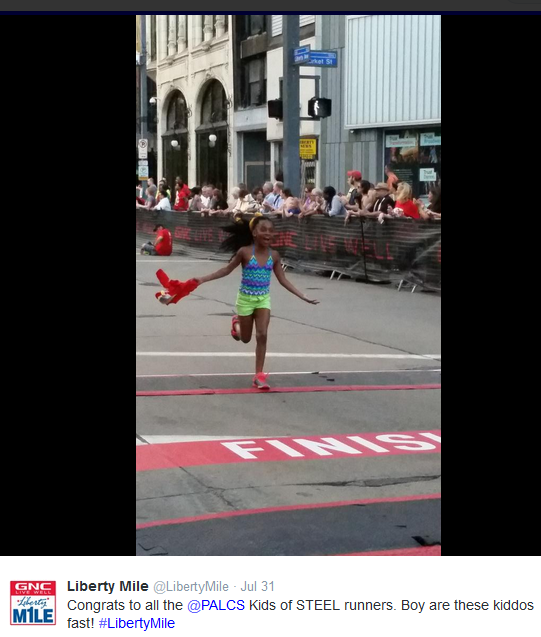 Watch more videos on Flotrack His interview gets cut a bit at the end. Post race with Coach Mark and Goda, volunteer and ex-staffer: If you have photos to share, please send them to me, Mark@Rauterkus.com. I know we’ve got some additional images from other sources.

Finally, one Hello Kitty backpack was left in my car. It will be taken to camp on Monday. But I’m not so certain if it should go to Langley or South Hills.

Thanks for all the parents and guardians who are going to go to the GNC Liberty Mile and cheer for and support your kids in the race on their big day.  Also, thanks for giving them a ride home when we’re all done.

Do stick around and watch the professional runners. That is fun.

Meet us in the Triangle Park at the corner of Liberty and Market. You won’t be able to drive there as the streets are closed for the race, of course. You might want to park by Market Square.

For the others who are going to pick up their athletes at the Summer Dreamers camp sites, (Faison, Brashear / South Hills, and Langley), please be present about 9 pm, or a tad sooner.  We expect to depart Downtown at 8:30 pm in buses.

The bus departure map is below. See the big circle? It is on Stanwix between Liberty and Penn Ave.

The race ends on Liberty Ave, about 2 blocks away. We, Swim & Water Polo athletes and staff meet in that green triangle in the middle of the map, corner of Market and Liberty. That’s where the parents pick-up their kids.

Look for me! Last year we were giving high fives to race victor, Jordan! 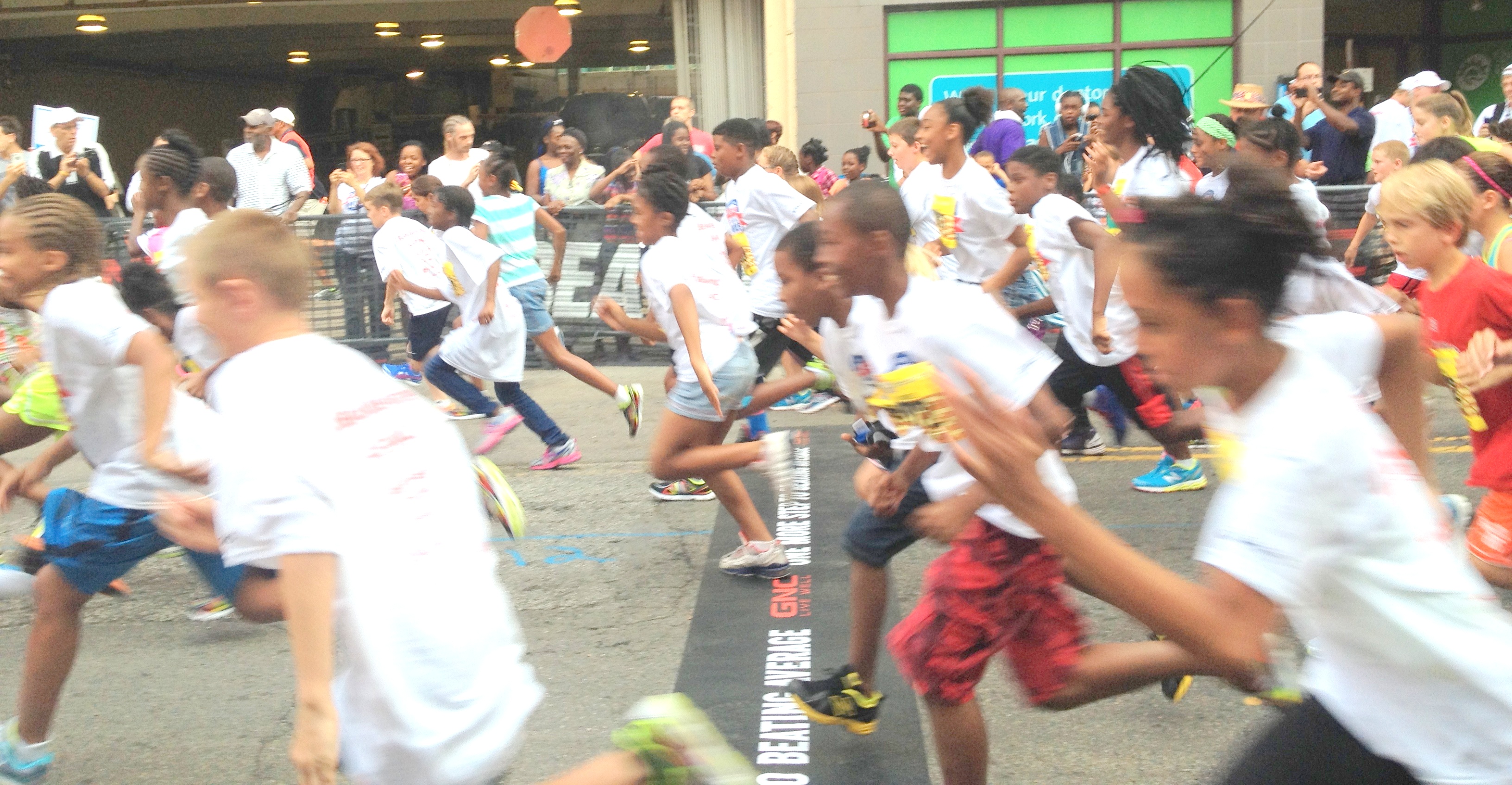 This is the entry for the GNC Liberty Mile in 2015 from our Swim & Water Polo Camp, showing kids and staff, organized by first name. We’ve done a lot of running this year, especially at Camp South Hills and with the King’s Canyon at Camp Langley and even at Camp Faison after the bus ride or on days when there wasn’t a bus. With the 90-degree heat expected in the next two days, the running is put on the back burner. We have an advantage however, as we can run in the swim pool!

Heather, Jordan and a few of the professional runners are on our team too. This year, our friends with Kids of STEEL also join in the fun with the race. Status for the entry for the GNC Liberty Mile on Friday, July 31, 2015. If you hope to attend and if you know you are NOT going to attend, we would still appreciate a completed HOMECOMING Contract. ENTRIES are DUE, as soon as possible. Regrets are due too.

Find your name, by camp, on this list. If it is not present, please complete the paperwork and get it back to camp, URGENTLY.

If you have questions, and wish to talk in person, please come with your child to swim at the Citiparks’ Northside’s Sue Murray swim pool on Monday or Wednesday, 6-7:30 pm or the Mt. Washington’s Ream swim pool on Tuesday or Thursday, 6-7:30 pm, or Friday, 5-8 pm at Thelma Lovette YMCA in the Hill District.

Watch this page for the lastest list as per the wiki: http://aforathlete.wikia.com/wiki/Category:Running_GNC_Liberty_Mile_2015

Kamya Kelly, NO FORM, NOT entered

Kenny Michel, NO FORM, NOT entered

Breanna Layburn, NO FORM, NOT entered

Jy-Juan Bryant, NO FORM, NOT entered

Arnav Kumar, NO FORM, NOT entered

Owen Mediate, NO FORM, NOT entered

Perhaps five additional forms are with Coach Sam at Faison and not on this list.

If you have sent in paperwork and still do not see your name on the list, the best approach is to re-do the paperwork and re-submit. Papers could have fallen between the cracks. A box marked “water polo” is in the office at every camp site. That might be the safest place to return completed papers.

As updates are made to this list, see https://CLOH.org for updates. 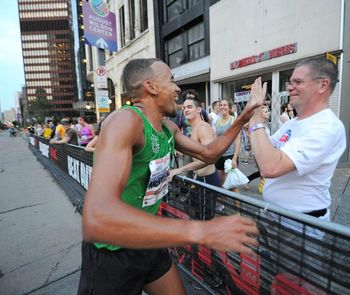 Pro Runners at Liberty Mile include our favorites, Jordan and Heather!

Defending GNC Live Well Liberty Mile champions Jordan McNamara  and Gabriele Grunewald will return to Pittsburgh to defend their titles in the Liberty Mile on Friday, July 31, 2015. The 4th edition features a prize purse of $25,000, the third largest for U.S. road miles.

The American Development Pro Mile features $20,000 in guaranteed prize money. The GNC Live Well Liberty Mile is the third stop on the Bring Back the Mile Grand Prix Tour 2015.