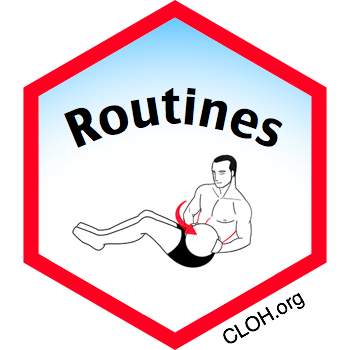 This SDA15 Medicine Ball Workout (routine) deployed for Swim & Water Polo Camp in 2015 is one of the approved routines for earning the Digital Badges/Exercises/Routines.

This is a routine‘s exercises are with medicine balls. Do the routine as described and stick to it for the duration of the season.

To do the Routine:

The number of repetitions per exercise can vary. Generally, do one set of 20 reps. When learning the routine, feel free to do the entire set of exercises four times but only do five reps per exercise.

Start in a standing position. Hold the med ball with two hands under the chin. Squad downward. A good squat goes so low as to drop the hips below the knees. At the bottom of the squat the upper legs are slightly below horizontal.

Another way to visualize the depth of the squat is to think of a marble. If placed on the middle of the thigh (upper leg) at the bottom of the squat, it would roll back to the and not to the knee.

Bend at knees so top of leg gets slightly below horizontal. Keep feet flat. Feet can be apart with the toes pointed outward a bit.

Sit on floor. Knees up. Heels light or not on floor. Straight back. Twist med ball from side to side. Arms extension, slam and heels elevated are variations. See the figure exercise the face of the Digital Badges/Exercises/Routines or watch the how-to video.

Pick up med ball from the floor and lift the ball to the waist. Take a breath. Perform a calf raise that points the toes and lifts the heel off the floor. Optionally, do a shoulder shrug with the toe raise. Optionally for varsity athletes, do straight back dead lifts in an additional set.

4. Planks with one hand on ball (exercise)

Start with a plank in push-up position but one hand is on the ground, the other hand is in balance on the ball. One plank with X-seconds with right hand on ball then left hand on ball.

Start by standing tall with a med ball held at chest height. The ball can stay in this position throughout this exercise. Then the left foot step directly forward to 12-o’clock. The back foot (right foot) does not move. The right knee (the knee of the back foot) bends low to softly touch the floor. Then return to a standing position with both feet together. On the next repetition, step with the same lead foot but place it forward and slightly to the right, to 1-o’clock, to perform the lunge. On the third lunge, step to 2-o’clock. Do lunges 12 times, to every hour around the clock-face with the same foot stepping out each time but in different directions. Bend as low as possible with each lunge. It is not necessary to touch the knee to the ground in every position as in the lateral lunge positions (i.e., 3-o’clock and 9’o’clock) the knee touch to the floor is nearly impossible. After doing 12 lunges, one in each clock position, with the right foot staying put, switch feet and do the next 12-lunges with the left foot anchored in the middle of the clock and the right foot stepping out.

6. Push-ups with one hand on ball (exercise)

With one hand on the ball and the other hand on ground, do the number of repetitions, but for beginners you should try to strive at least 10 push-ups in a set Take a short break after the first set. Then switch the hands so other hand is on ball. Do a second set of push-ups.

Lay on back. Move ball from chest to extension. Okay to toss and catch, if you can control the ball and not smash one’s face or interfere with others doing their routines.

8. Two handed, straight arm lifts while laying on back (exercise)

Move ball from pockets to over-head touch and back.

Standing, two hands extend ball over head. Then, bend elbows and lower ball to backwards to touch back of shoulders. Then lift ball straight up again to the over-head-starting position.

Lay flat on back with ball over head. Do a sit up and touch ball to toes. Lay flat again. Repeat for 15 times. If you can complete med ball sit-ups easily try 25 then 30 sit-ups

Flexibility motivation and improve yourself