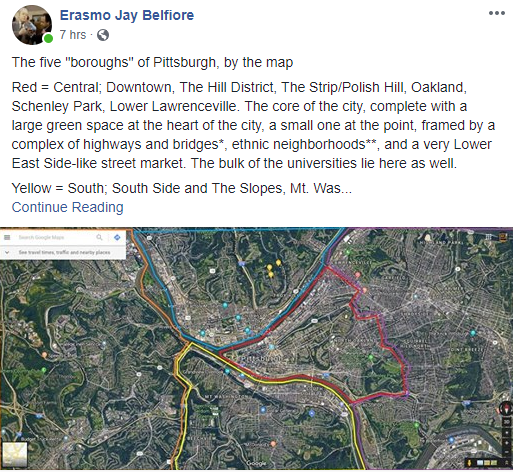 The five "boroughs" of Pittsburgh, by the map

The core of the city, complete with a large green space at the heart of the city, a small one at the point, framed by a complex of highways and bridges*, ethnic neighborhoods**, and a very Lower East Side-like street market. The bulk of theuniversities lie here as well.

"Brooklyn Lite"; same big city taste, half the attitude and density. Crowded neighborhoods. Parking nightmare. Some posh, but also slums, and mostly true to blue collar roots. Like Brooklyn, this area is also the most hemmed in of the quadrants surrounding the core. Easy access to the highway is limited to the areas on the north and west. On the whole, Rt. 51 is more congested, winding along more slowly than the secondary highways out of other flatter or less congested areas.

What used to be outlying areas, and where the wealthy of the early days built their homes. The most ethnically diverse area. A secondary downtown in East Liberty. Masses of both well-off neighborhoods and slums extending out to Monroeville. Upper Lawrenceville as a trendy counterpoint to the South Side Flats. Most like Queens.

This area by far shows the heaviest hand of the urban renewal of the 50's and 60's, and consists mostly of tough neighborhoods and projects. Most like The Bronx.

Subsequent waves of wealthy and working class people gravitated here in search of space and air. Most like Staten Island and New Jersey.

*Urban "Renewal" remade downtown, but crushed the Lower Hill District and a wide swath of the North Side, as well as East Liberty.

Point State Park, formerly a floodgate which would open on Downtown with some regularity, is based on the recommendations of New York's Robert Moses. What his Biblical namesake did in testament, he did in reverse, literally stitching together lands separated by water in New York. The Park, and the shiny buildings behind it, and the highways and tunnels converging near it, and what we know as the Interstate Highway System are all based on his works. He coined the term parkway. He rebuilt every park in New York, and created state parks. The Federal Government came to Moses to learn how to build highways, and cities far and wide, starting with Pittsburgh, came to him for advice on how to remake their cities. When the desire to rebuild fell victim to flawed top-down thinking and greed, too much was done too soon.

The scars of urban renewal are still being repaired, but at least now, it's on a comparatively blank canvas. East Liberty and The North Side are largely remade. The Lower Hill is the last remaining project.

The Hill District was actually known outside Pittsburgh as Little Harlem.

Likewise, Polish Hill is an accurate name based on original ethnic makeup.

Told to STOP playing together. Playing well with others is getting more and more illegal.

Citiparks closed all the parks

Historic flashback to the 1918 flu in Pittsburgh, via posting and history book